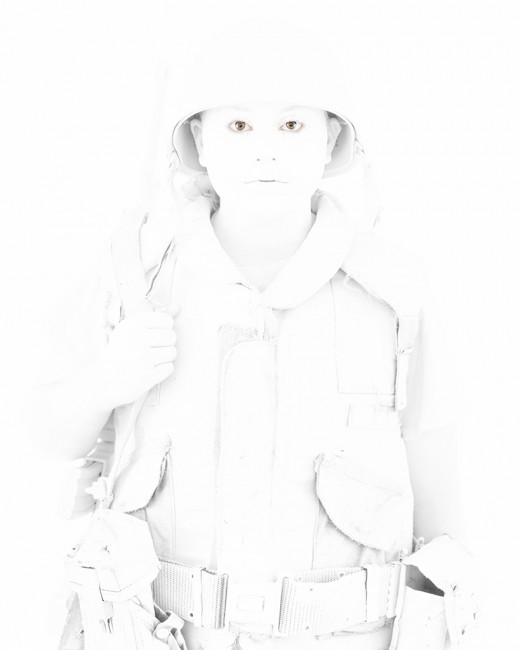 Camouflage as a means of concealment has often been associated with military entities. It is important to note that the function of the camouflage extends beyond its practical use as a type of dress that conceals, to one that also unifies. This uniform not only facilitates the soldiers’ blending into their environment, but also allows them to blur the lines within their own ranks. Within the context of modern warfare and its surrounding politics, the government fails to disclose the obvious implications of military service, instead hiding the potential for emotional and physical distress behind a mask of consistency. There is something amiss if there is a need to hide, and the acts of camouflaging and photographing ultimately focus on what is being concealed, creating a unique clash of contradictions.

My interest in camouflage stems from my service in the military. As a former Marine, ideas of conformity and identity within the tactics and politics of the military continually filter into my artistic practice. Blanc revisits the act of transformation I encountered as a new recruit. With these images I physically remove each individual’s identity with painted uniforms, makeup, and lighting. This stripping of identity forms a void that awaits a new definition. The models for Blanc have never served in the armed forces, but they are between 18 and 25 years old, the age most sought after for recruitment. In these moments before the unknown, their naiveté contributes to an unsuspecting stare out into the distance as they wait in a state of readiness.

Blanc is currently composed of fifty images, each depicting a uniformed white soldier photographed in front of a white background with the 4X5 view camera. Their collective identity becomes more apparent than that of the individual, leaving the soldiers as interchangeable parts within the repetition of the photographs. The images are digitally edited and printed using archival pigments on 32” X 40” 100% cotton rag paper. The editions are limited to two, forcing the escalation of numbers to fall upon the willingness of individuals to participate as models for new photographs. Formally presented as one piece, the slightly larger-than-life images are not to be seen as individual portraits and are shown in groups of three or more. Prints are clasped with white aluminum strips at the top and bottom and are hung either against a white wall (for smaller showings) or in ranks extending into the space of the gallery (for larger showings). When hung in formation in a standard white-walled gallery, Blanc itself becomes camouflage.