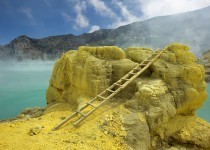 The quietly active volcano emits gases through fumaroles inside the crater, and local miners have tapped those gases to earn a living.

The first miners arrived here fifty years ago. Stone and ceramic pipes cap the fumaroles, and inside, the sulfur condenses into a molten red liquid, dripping down and solidifying into pure sulfur.

Miners hack chunks off with steel bars, braving extremely dangerous gases and liquids with minimal protection, then load up as much as they can carry for the several kilometers to the weighing station.

Loads can weigh from 170 to 220 lbs, and a single miner might make as many as two or three trips in a day.

At the end of a long day, miners take home approximately 6 $.

The sulfur is then used for vulcanizing rubber, bleaching sugar and other industrial processes nearby. 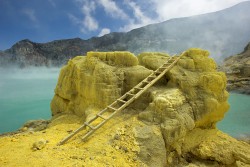